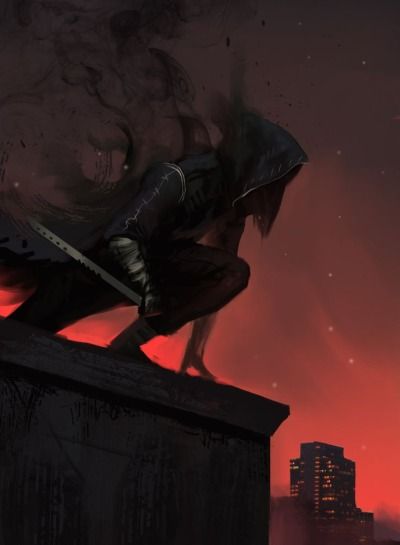 “We’re out of time, let’s get out of here,” Telfor announces as the echoing knock fades.

“No, I’ve nearly got this!” Laurin answers, still intently focused on the desk lock.

The same moment this quick exchange takes place, Diatter screams unintelligibly. The cry is quickly cut off as Jasha buries her knee into his guts and shoves a bunched up cloth into his mouth. The damage may have been done already, the polite knocking is replaced by a pounding, and muffled voices.

“Blood of all! Jasha, get Diatter to Vahkragg and get ready to escape out the back.”

Jasha gets moving, and Telfor turns to Laurin again, “Diatter’s co-conspirator’s are due, that’ll be them at the door. We need to leave. Now. Sooner.”

“Then go, I’ll catch up,” Laurin hisses back, his face a mask of absolute focus, “If there’s a chance Frey’s location’s in here I’m not going to miss it.”

Sara’s face intrudes in Telfor’s mind. In the same position he wouldn’t do any different. Upstairs the pounding and shouting has stopped, likely they were going to get the guard. That gives them maybe a couple of minutes.
This thought is interrupted by the sound of a heavy impact on wood. They must have their own temple soldiers with them, or are confident enough in their own ability. Looking back at Laurin, Telfor considers his options and liking none of them rushes up the stairs towards the door.
Now there he finds Vahkragg barring the door, the thick wood splintering under the opposing forces visited upon it.

“Where’s Laurin?” Jasha’s voice from behind him.

“He’s nearly done, we’re going to buy him the time to find his niece.”

Without a word, Jasha drops Diatter and draws her shield and short sword. Following her lead, Telfor does the same and falls in beside her so their shields cover the whole corridor.
Another thunderous blow strikes the door, and Vahkragg’s enormous form slides back and a long crack opens across the wood.

Releasing the door, the plainsman steps back down the hall. They make room for him to pass behind then reform just when the door explodes open, shards flying off and bouncing off their shields.
Two figures rush through the exploding door. Their speed enhanced by magic, somehow without having been drawn from the ether. Jasha and Telfor are taken off guard, the collision as the figures ram into them drive them back sliding several feet. The driving force relents as Vahkragg’s pole-axe thrusts over the shields forcing the figures to dash backwards.
In the moment’s reprieve Jasha draws magic from the air and weaving it into her muscles. Telfor studies their opponents. Two figures robed in black with shaved bald heads and masked faces. They certainly fit the part of acolytes of Anir, but beyond that he doesn’t know anything more about who they could be.

He should have had more than enough time to do that. But in the barest fragment of a moment his focus is split between his foes and Laurin, the figures leap forward again with deadly alacrity.
Jasha has the focus to thrust with her blade, forcing one of the two to halt their charge to avoid being skewed. The other, however, levels and thunderous kick into Telfor’s shield. Like the door before it, Telfor’s shield buckles, only the give in his arm stopping it from shattering into pieces. Numbing pain runs up his arm and join with Jasha’s shield separates somewhat.

Vahkragg’s weapon thrusts again. The figure attacking Telfor sidesteps to evade the strike, giving him the moment to recover before he could be overrun.
Whoever these figures are, they’re well trained. Without their formation and numbers they wouldn’t stand a chance against the assailants. Even if Laurin made it here, they wouldn’t have an opening to escape until their attackers were dead.
Thanking the Corpse God for the terrain, Telfor joins Jasha’s tempo in thrusting his blade in a fashion to ward off the tireless onslaught. The skirmish stretches out, lasting almost a minute though to Telfor’s exhausted and sore shield arm it feels far longer.
Footsteps from the cellar announce Laurin’s return.

“Get Diatter,” Telfor orders, “We’re leaving through the back”

The formation starts slowly backing up, continuing to hold the line. Sweat runs down Telfor’s face, his breathing heavy. Their assailants growing more recklessly determined with his command, redouble their assault.
Then it happens. The first figure overextends, seeing his chance Telfor lunges and his blade barely fails to impale it’s target delivering a deep gouge along their chest, instantly reddening the black cloth.
His weariness is deeper than he realises and he realises too late his shield arm has fallen. A crushing blow connects with the side of his head above the shield and he loses his awareness space and crumples.
Through the fog in his head, Telfor hears the sound of shouting and fighting. Clawing his way back to his sense, he comes to in the alley behind the house being supported by Vahkragg who has Diatter under the other arm. Laurin has Jasha on his shoulder, she seems aware but pale and weak looking. Running still, they are being led by Laurin in the direction of the slums.
Feeling capable again, Telfor releases himself from Vahkragg’s hold.

Jasha croaks, her voice dry like in the depths of a fever, “You fell for their bluff. They must have been desperate because that one let you cut them so the other could knock you out. Fool underestimated me, I got you back. Burned myself out though, and they escaped rather than fight these two while bleeding out.”

Holding up their flight for the moment, Telfor taking over from Laurin lifts his wife off the ground.

“Slum route,” Laurin answers as they return to running, “Can’t risk the central districts covered in blood with a priest in chains.”

They pass through the small unmanned opening in the city walls that separates the slums from the city proper. The omnipresent lights of the city left behind them. Before them, the massive sprawling expanse of the slums where the innumerable unfortunate souls of Capital accumulate, hungrily takes them.

More fighting and magic! It’s been a while since we’ve had any of those. Our heroes held their own this time even coming out slightly ahead, though they did have the advantage of numbers and terrain. Now all they need to do is make it back to safety through the slums of Capital, dangerous at night even without shadowy assassins hunting you.
I’m sure they’ll be fine.

I'm writing to build a habit, practice, and be creative. View all posts by Zairron Plaguestrider