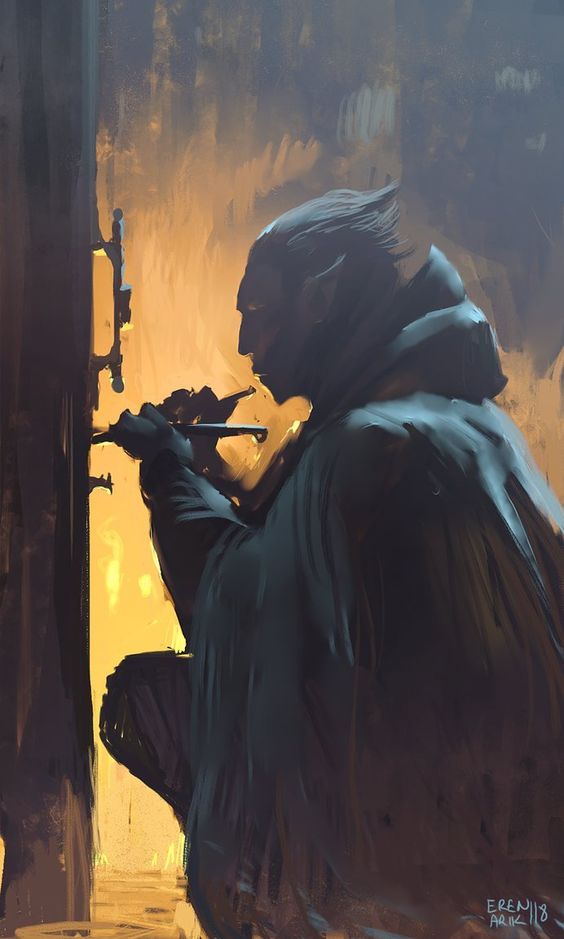 “What should we do?” Jasha whispers to Telfor, her tone softer than usual.

Telfor pauses to consider. Staring through the bars at the cursed thing glaring back at him, he asks himself the same question. What does the presence of this monster change? He can’t think of anything, their job is only to bring the priest.
Slowly stepping up to the metal door, Telfor grips the bar and rattles it. Locked, as expected. He peers through looking around the room. Inside is a plain, but solid looking writing desk in the corner just around the corner out of easy sight from any further back. As well, closer now he notices the chain binding the creature to the wall.

“There’s a writing desk in there, and the monster’s restrained. We should find the key and see if there’s anything of use in that desk.”

“The priest would know,” Jasha says.

Laurin nods, fishing through his pockets and retrieving a folded cloth he kneels by the door. Opening the cloth, he pulls a couple of thin metallic tools and inserts them into the keyhole.

“Our little secret, right?” He says to the others, “But look for a key anyway, I’m just a hobbyist”

Telfor nods, shaking his head at the thieving mercenary. Together he and Jasha move back out of the cellar.

“Tel, do you think the crown knew about this? Is that thing why Arnhilde pushed you so hard to take the job?”

“I don’t know,” he answers, “It’s not like knowing would have stopped me. I think there’s something else going on.”

Arriving where Vahkragg waits sitting on a table with Diatter sprawls in pain on the ground at his feet. Telfor gives the giant a questioning glance as they approach.

“Thought he could conjure a spell and I wouldn’t notice.”

Telfor nods and shoves the priest with his foot, rolling him onto his back and handing the lamp to Jasha kneels down to take Diatter’s gaze.

“Good evening father. My companions and I found your little secret in the cellar and if you would be kind enough to give us the key without us having to turn your house upside down, we will inform the magistrate that you co-operated.”

Diatter coughs weakly, wheezing as he breaths indicating how hard Vahkragg must have struck him. His voice is hoarse and broken as it comes.

“I don’t have it. I swear. They bring it when they come, and take it when they leave. I have never even seen what it was you found down there. Please, listen to me, if you take me to them they will kill me and kill you too. Take me to the church and we will keep you safe.”

“Who are ‘they'” Telfor asks, ignoring the customary threats and bargains so common among captives.

“My superiors. But that doesn’t matter. What they have down there is a secret, but it’s not just our secret. It belonged to the Crown! We stole it from them as proof of their treachery!”

Telfor stares intently at Diatter, trying to untangle the truth from the lies and with a frustrated growl stands and turns back to Jasha.

“Search the place, see if you can find the key. Vahkragg, you go with her, I’ll see if I can’t convince Diatter to remember a spare key.”

Jasha nods professionally. Lighting a second unlit lantern, she leaves the first with Telfor and with a silent gesture leads Vahkragg out into the rest of the house to search. Diatter continues wheezing, his breathing less pained but clearly fearful. He could use that.

“I’m not in the mood to sit here and listen to you continue to lie to me all night. Say anything but what I ask you and you’ll get to learn if I can hit as hard as my friend, understood?”

Diatter nods silently, tears building in his eyes. Too much fear, this early, Telfor notes.

“Is there any way for us to get into the locked room in the cellar?”

“What are your superiors names?”

“I don’t know, but they operated with the authority of High Priest Berter. I answer directly to him.”

“When do they come?”

“Once a month. I never know when.”

“Have they come this month.”

“How long has this been going on?”

“This will be the fourth month.”

Telfor pauses to contemplate everything he’d just been told. The complete and immediate co-operation of the priest threw him off balance, they were never this forthcoming unless they were lying.

“You’re not trying too hard to keep your order’s secrets.”

Diatter’s voice carried an almost frantic tone, “I’m just a priest. I don’t want you to hurt me.”

God’s rot he’s pathetic, Telfor thinks to himself, forcing down intruding feelings of guilt and shame.

“Door’s open, get down here!” Laurin’s voice echoes up from below.

A grin opens up on Telfor’s face, “Good news, Diatter. You won’t have to die not knowing the secret you’ve been hiding.”

Soft pathetic sobs from the priest wrack his small, fat body. He doesn’t resist as Telfor drags him to his feet and leads him down into the cellar. Passing Vahkragg on the way in, the hidden staircase too small for his large frame, Jasha and Laurin are waiting within the cell.
Laurin working on the lock of the writing desk, is guarded by Jasha sword drawn, warily watching the undead thing as it strains ravenously against the chain that binds it. The moment they come into sight of the monster, Diatter lets out a sharp involuntary shriek and friezes in space trying to resist being brought any closer.

“What’s the matter, Priest? This is your guest, isn’t it?”

Diatter is inconsolable, weeping and pleading for mercy seemingly without recognising the words being said to him or their meaning. With disgust, Telfor drops him outside the cell and steps inside.

“Do you think you can get this one, Laurin?”

“It’s simpler than the door, shouldn’t take me more than another five minutes if we’re lucky.”

Upstairs, a loud knock on the door echoes through and down into the cellar.

That’s probably just late night/early morning door to door salesmen. If they ignore it, I’m sure they’ll go away.

Tonight’s featured art is called Lockpicking by erenarik, a cool artist with a really broad spread of art you should check out.

I'm writing to build a habit, practice, and be creative. View all posts by Zairron