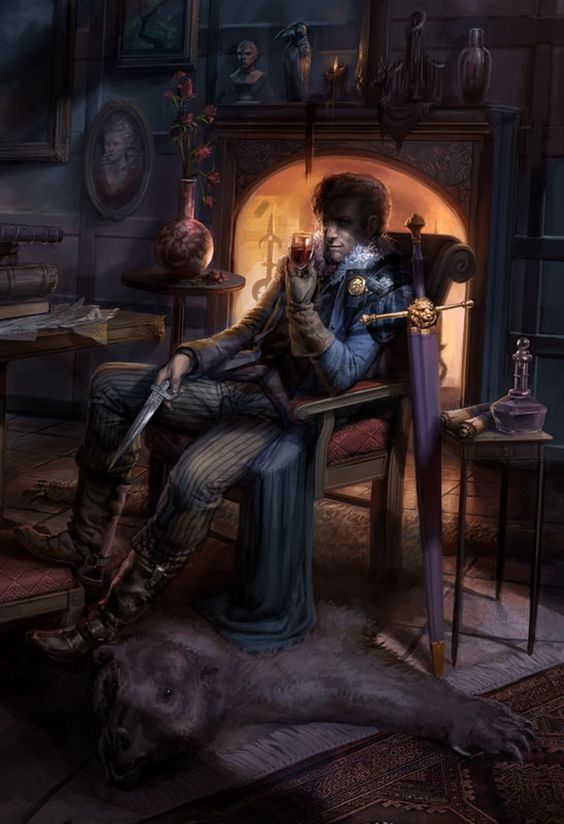 “When are you going to settle down, Vahkragg?” Laurin asks from the head of the group. Looking back without slowing his quick pace when not receiving an answer, unvoiced laughter plain on his face. “I suppose not. I’ve heard said that the plainsmen don’t marry, they just couple when the mood hits them and let the tribe raise any children. Sounds like my kind of people.”

Vahkragg continues walking vigilantly through the dark alley as if Laurin hadn’t even spoken. His right hand flexes slowly, however, Telfor notices. The gesture could be annoyance, or simply anxiety over the job. It was difficult to be sure, but he didn’t want to let Laurin keep prodding until they found out.

“Where are we going, Laurin? You still haven’t told us anything about this plan of yours.”

“Haven’t I? That’s odd, seems pretty stupid to agree to a plan you don’t know anything about.”

Hot anger began building in Telfor, the heat spreading up his neck and ears. He could feel Jasha’s eyes on him, she’d said the same thing earlier.

“Just tell us the plan, rake.”

With a pleased laugh, Laurin says “Not much of a plan really. I know where he lives, we go there, you knock on the door and ideally he agrees to come quietly.”

There’s a tone to his voice the old soldier doesn’t like, “You don’t think he will?”

Laurin shrugs like couldn’t possibly know anything, but continues anyway “Well, I’ve never met him personally so I couldn’t say much as to the gentleman’s quality. But there are some who say that this priest has been engaged in some very questionable activities such that going quietly may not have a desirable outcome for him.”

Telfor exchanges looks with Jasha and Vahkragg, the contract had been non-specific specific on the reasons for the arrest. Priest’s weren’t usually magic users, but they also weren’t usually wanted criminals. If he was, that would be the most likely outcome for things getting unpredictable.

“Do you think he’ll cause us any trouble?”

“A single priest against four armed and experienced soldiers?” Laurin laughed, “I should hope not! No, he won’t cause us any problems.”

Telfor frowned. Thing’s weren’t adding up and he didn’t like it when that happened.

“Why did you want to come along then?”

Laurin simply answers with a smugly condescending look, but before he can be questioned further he changes the subject, “We’re almost there. The good father’s home is on the street ahead, just two doors to the left of where we come out across the road.”

True to his word, the narrow footpath they’d walked between the stone houses turns towards and opens onto the main thoroughfare. The four of the pause behind the last house, out of sight of the road but still visible to any resident who might happen to peer out their back window.

“Is there a back way on the other side like this one?” Telfor asks.

“Alright, Vahkragg, Jasha, you two loop around and watch the back. We’ll give you a minute to get into position then knock on the door.”

They nod and together depart the alleyway. Laurin leans against the back wall of one of the houses, casually watching Telfor as they wait.

“Are you expecting any trouble at all?” Telfor reiterates now he has the chance.

Laurin pauses as if to consider his answer, “Not in the way you mean.”

Laurin actually looks surprised at the assertion, raising one eyebrow and studying Telfor for a moment before another burst of incredulous laughter breaks from his lips. “You’re serious. I’ll never understood how you got this far, Tel. Look or don’t, it’s your choice, personally I’d rather know if there’s anything worth knowing.”

With no time to continue the discussion Telfor just narrows his eyes in disapproval and starts walking from the alley towards the house.
Capital is old. Not all of it, of course, but there are parts like this one that predate the current kingdom. The stone buildings along this street almost resembles the compact design of the under-mountain folk. Compact and practical, only the obviously skilled craftsmanship and strangely boxy artistic flourishes, left over from whatever culture had originally built them, kept them from seeming like simply giant carved rocks.
Rapping his knuckles on the wooden door, Telfor waits patiently for an answer. After a short wait, the door opens and in the unlit interior of the doorway a rotund, middle aged man of less than half Telfor’s height looks up in confusion.

“Father Diatter? I have with me a warrant for your arrest, I request-”

Telfor is cut off shortly into his spiel by the priest attempting to slam the door in his face. However, this was the reaction they’d been expecting and before the door was completely shut, Telfor shoved back with his vastly superior size and strength knocking the priest back and off his feet.
Scrambling to his feet, the priest makes to dash deeper into the dark of the house. He wasn’t fast enough though, before he able to properly stand the priest was back on the ground with Laurin’s vice-like grip on his wrist and knee on his back.
Recognising the situation was under control, Telfor also enters the house, closing the door behind him to keep out curious eyes.

“As I was saying, you’re under arrest.”

Telfor takes his manacles from their pouch and taking over from Laurin, locks the small man’s wrists fastly. Rising to his feet again, he considers the complete lack of light in the house.
In the time he had taken to bind the prisoner and consider the lack of light, Laurin had disappeared deeper into the house. Cursing him, Telfor resolved to wait with the prisoner, not that he’d have any luck pursuing Laurin in the dark. Laurin’s ancestry was in the deep wood. Light rarely broke the ancient canopies there so his eyes were well suited for this environment.

“Please, you’re making a mistake.” the voice of the priest was high and thin, “I am a servant of the gods. Return me to the temple and you’ll be rewarded twice what they’re offering you. By the will of Anir, I swear it!”

A lot of weirdness around this job, but overall it’s seeming surprisingly simple in execution. What’s Laurin hoping to find in the dark? And that church money must sound pretty tempting to Telfor right now.

Today’s featured art is called A Quiet Man by Peter Mohrbacher, I highly recommend checking out his stuff it’s hyper cool. His Angelarium is amazing.

I'm writing to build a habit, practice, and be creative. View all posts by Zairron Plaguestrider